RAF Mildenhall is home to the 100th Air Refuelling Wing which fly the the Boeing KC-135R & under the command of the 351st Air Refuelling Squadron. On arrival at the operations building of the wing you are greeted with a large sign displaying the initials NKAWTG which means ‘Nobody Kicks Ass Without Tanker Gas’…

After a short wait for the crew of  ‘QUID 41’ we headed into the briefing room. Leading the brief was Captain Brian Dunn who would be in charge of the flight. The brief is very detailed and consists of every possible check that can be done on the ground so that the other crew members are fully aware of there own roles prior to the flight. Captain Dunn first asks for the weather talking via video link to a large LCD monitor, there were a number of thunderstorms around the Mildenhall area which would slightly delay our flight but nothing of major concern.

Captain Dunn then runs through the details of the basics of the flight and our receivers for the day. We would be flying to northern Germany to the ‘Rosy Track’ our receivers would be 6 German Air Force Tornado ECR from TLG51 based at Schleswig Air Base. Refuelling other NATO aircraft is a vitally important role for the wing.

The captain then moved onto specifics such as agreeing to which pilot would be performing the take-off & landing. Emergency procedures are covered in great detail such as engine fire of start-up and control surfaces during the take-off run. Diversion airfields are also pre-planned as part of planning the route and for this mission the primary divert airbase was Ramstein in Germany. Captain Dunn then asked the Boom Operator, Master Sargent Heath “Tuna” to run through the details of the fuel to be off loaded, in this case 60,000 lbs are available, he also discusses emergency breakaway procedures if there are any complications during the actual refuelling. After any final questions the brief finishes.

With the briefing complete the crew transport arrives to take us to the aircraft. The KC-135R assigned to this mission would be serial number 58-0118 one of the oldest Stratotankers still flying in the inventory. The co-pilot and boom operator climb aboard to start there internal checks whilst the captain is responsible for all external checks from various engine panels, landing gear, ailerons to the final ‘kick the tyres’

Due to the fact that we were refuelling the Tornado aircraft which has a probe system to take on fuel, this particular aircraft had been fitted with a drogue system using a special adapter unit. In this configuration the aircraft retains its boom, but has a hose /drogue at the end end instead of the usual nossle. Also on this particular Stratotanker is the the multi-point refuelling system a modification of two refuelling pods added to the wing tips, this allows the aircraft to refuel two aircraft at once. This system is also known as 'Mippers' to the crews. Whilst refuelling with the boom/drogue system the boom operator holds the boom in a static position, while the receiver aircraft then flies the probe into the basket. Unlike the soft canvas basket used by other airforces, the adapter unit uses a steel basket. Canvas baskets can be contacted slight off centre, meaning that the probe can be guided into the hose receptacle by the canvas drogue. The metal drogue when contacted even slightly off centre will pivot out of place and potentially hitting the receivers fuselage and causing damage. The other major difference with this system is that when contacted the hose does not retract into an HDU. Instead the hose bends depending on how far the the probe is pushed towards the boom. If it’s pushed too far, it can loop around the probe causing damage to the windscreen, if not pushed far enough the probe will disengage, halting refuelling. Staying properly connected to the KC-135 Drogue system is considerably more difficult that the traditional hose/drogue canvas configuration, so the pilots really have to be on there game…

With final checks complete we taxi from our hard-stand to runway 29 we then make a steady climb out towards the North Sea, todays mission would take us over German airspace as mention earlier to the refuelling track known as 'Rosy' just North of Breman which is which is 30 Nautical Miles by 14 Nautical Miles in size with a flight level block between 9,000 to 23,000 feet with a minimum flight refuelling determined by any flight traffic in the area at the time. The whole of the area is controlled by Bremen Radar. An hour into the flight the boom operator repositions from the cockpit to the capsule at the rear of the aircraft to wait for it's receivers. The boom operators position is basically a small bench which is reached by climbing into the compartment then crawling into position, it's incredibly cramped with the boom operator lying on there front with only a chin rest for comfort but the view through the boom window offers an incredible wide viewing area. We descend to 18,000 feet and not long after the first of four Tornados form up on the starboard wing-tip to await there fuel.

As stated earlier on the boom/drogue system the boom operator holds the boom in a static position & the pilot ensues they are lined up against the markers on the underside of the KC-135 then flies the probe into the basket, this takes a lot of skill from the pilots & the German pilots were exemplary with there hook-ups. We refuelled the Tornados for around about ninety minutes with multiple hook-ups.

With the mission complete and the boom secured back into standard flight configuration, we headed back to the UK and towards RAF Mildenhall. Spending a day with the 100th Air Refuelling Wing goes to show the skill of the pilot, co-pilot & boom operator and shows Air-to Air refuelling is essential to modern military flight operations. 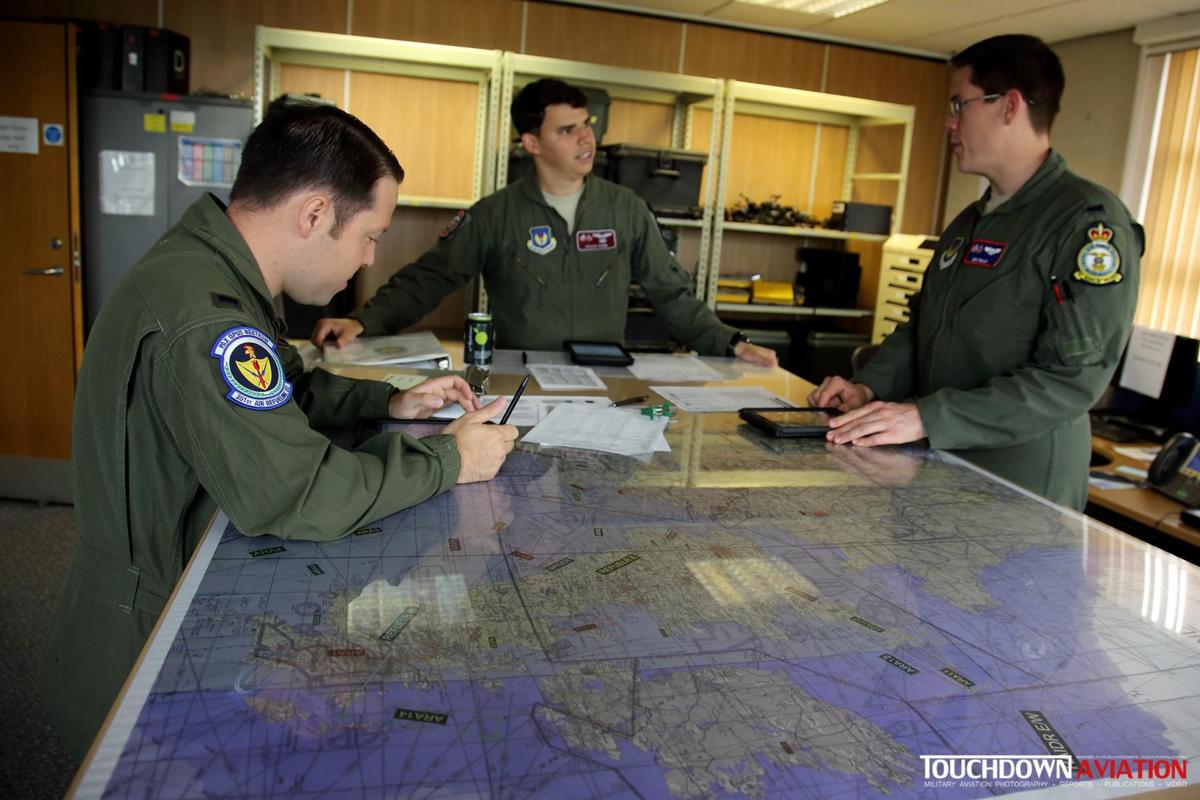 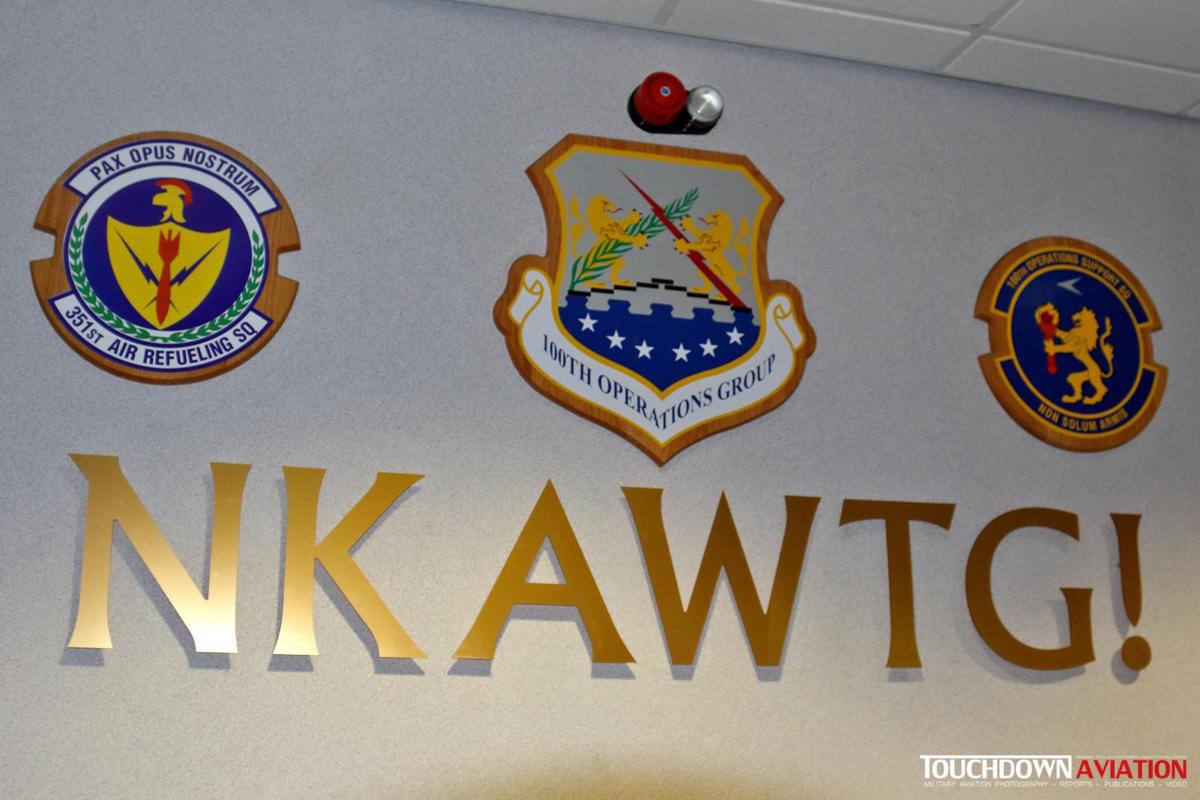 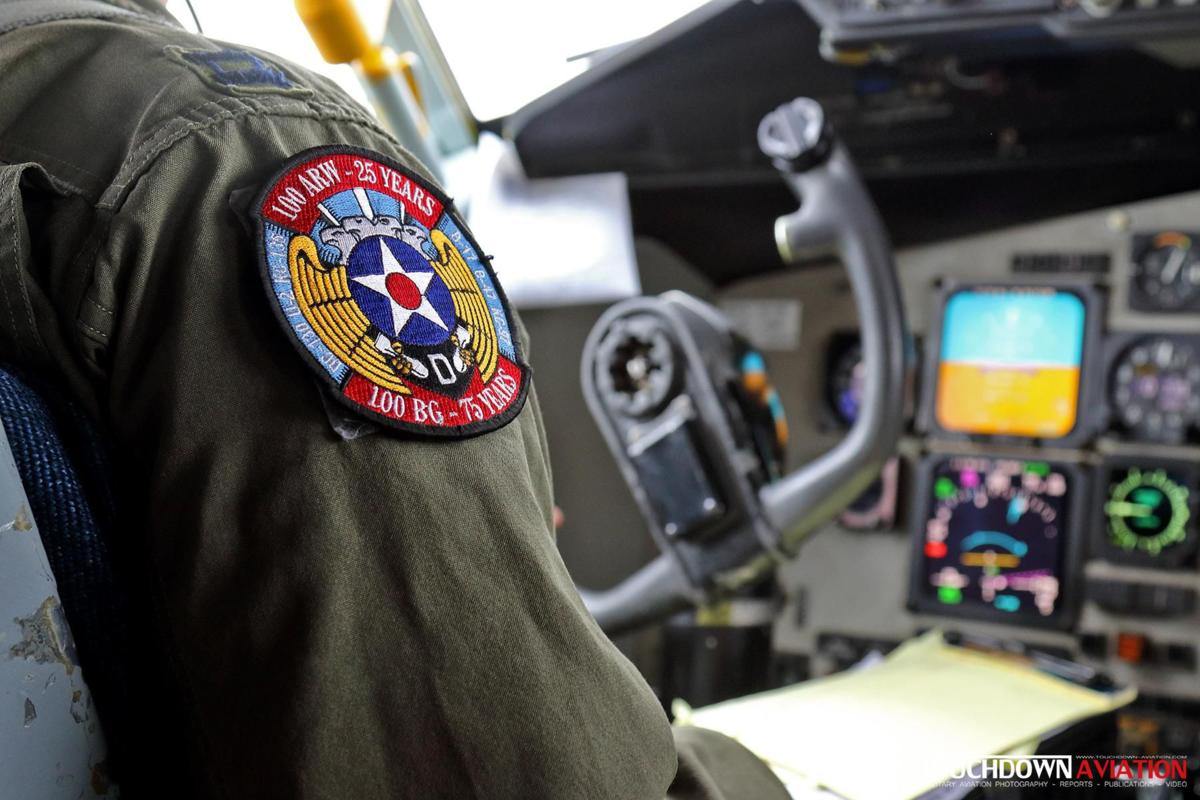 With the motto "Peace Through Strength" the 100th ARW is currently composed of 15 KC-135Rs and provides a critical air refueling bridge which allows the Expeditionary Air Force to deploy at anytime. During WWII its predecessor unit, the 100thBombardment Group was an Eighth Air Force Squadron flying the B-17 Flying Fortress. During this time the group suffered a significant amount of losses in combat - it was then when the unit inherited the nickname the "Bloody Hundredth". The 100th is the one and only wing in the US Air Force inventory to be allowed to display the (Square D) tail markings of its WWII predessor after the wing earnt its honours.

The wing is divided into three groups. 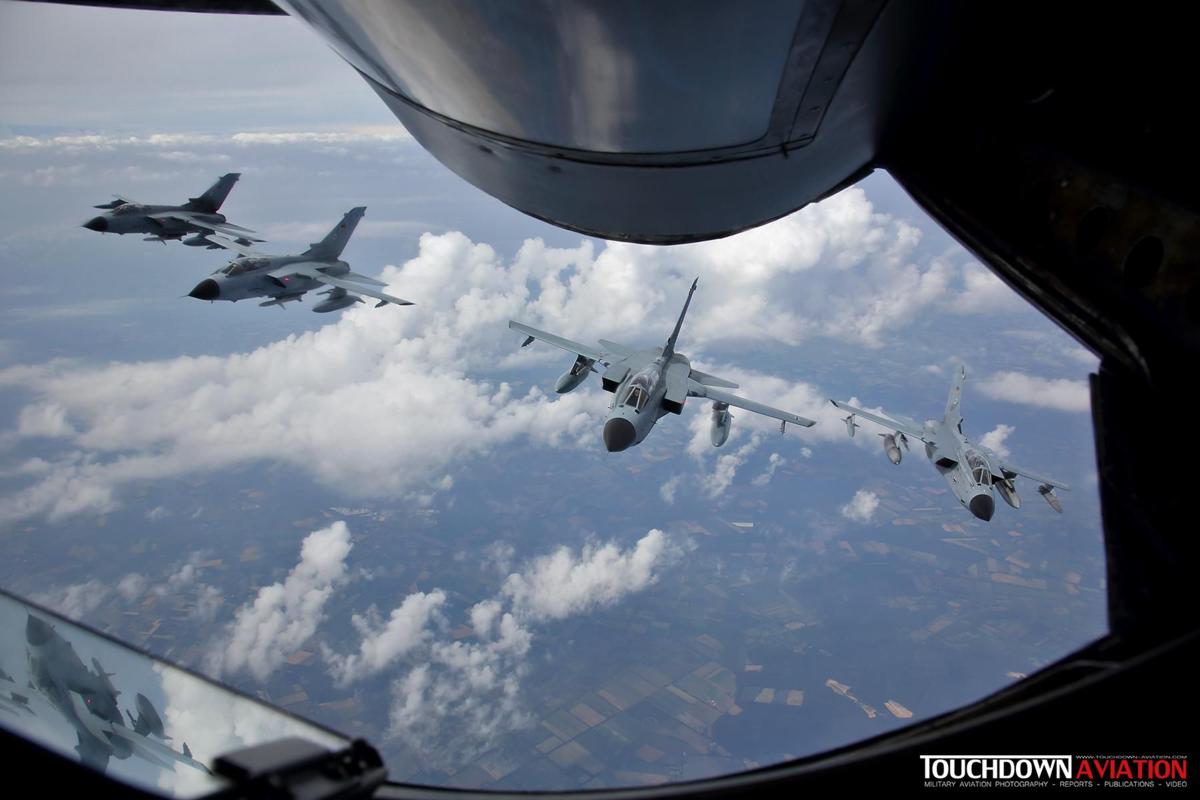 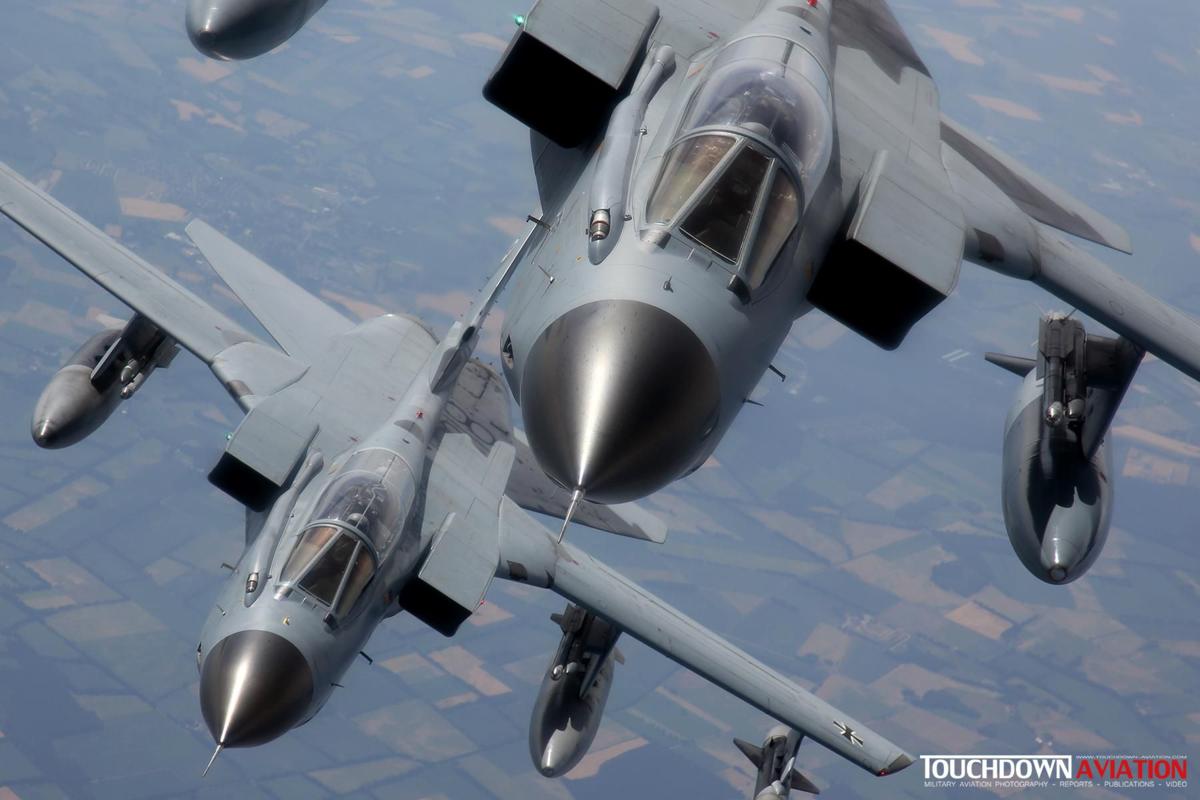 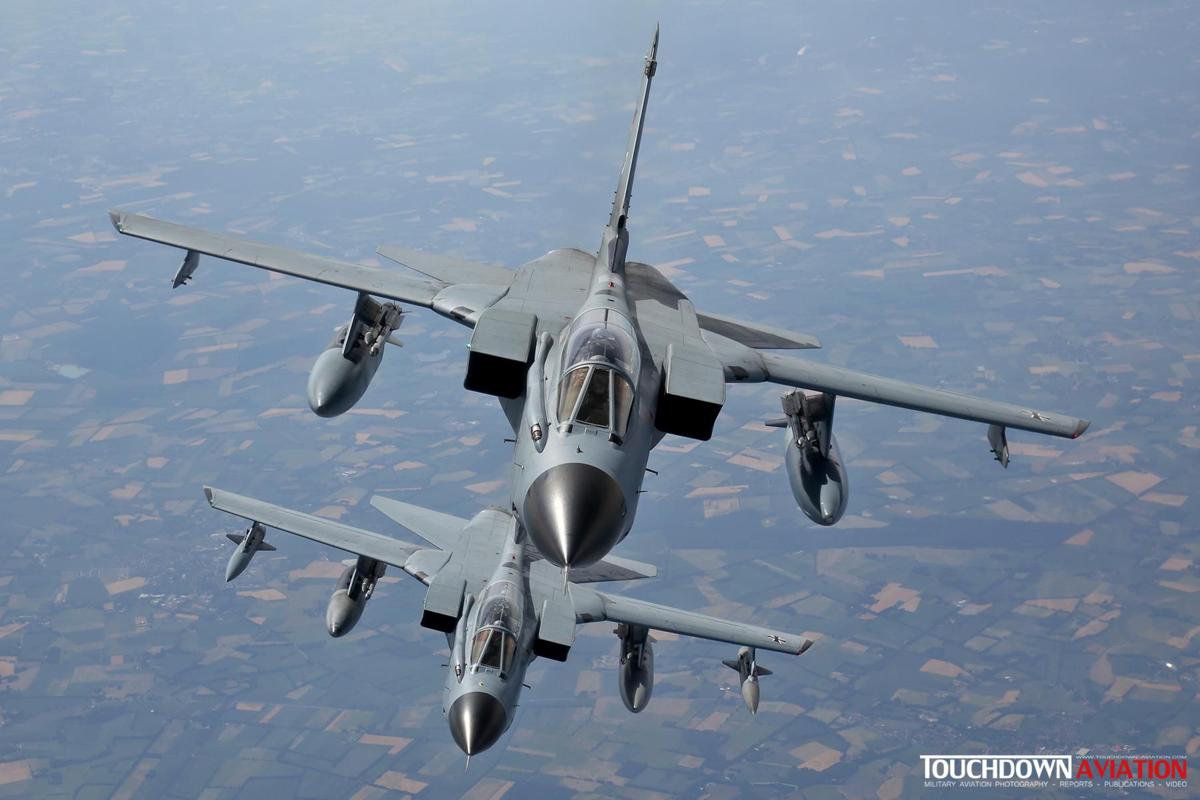 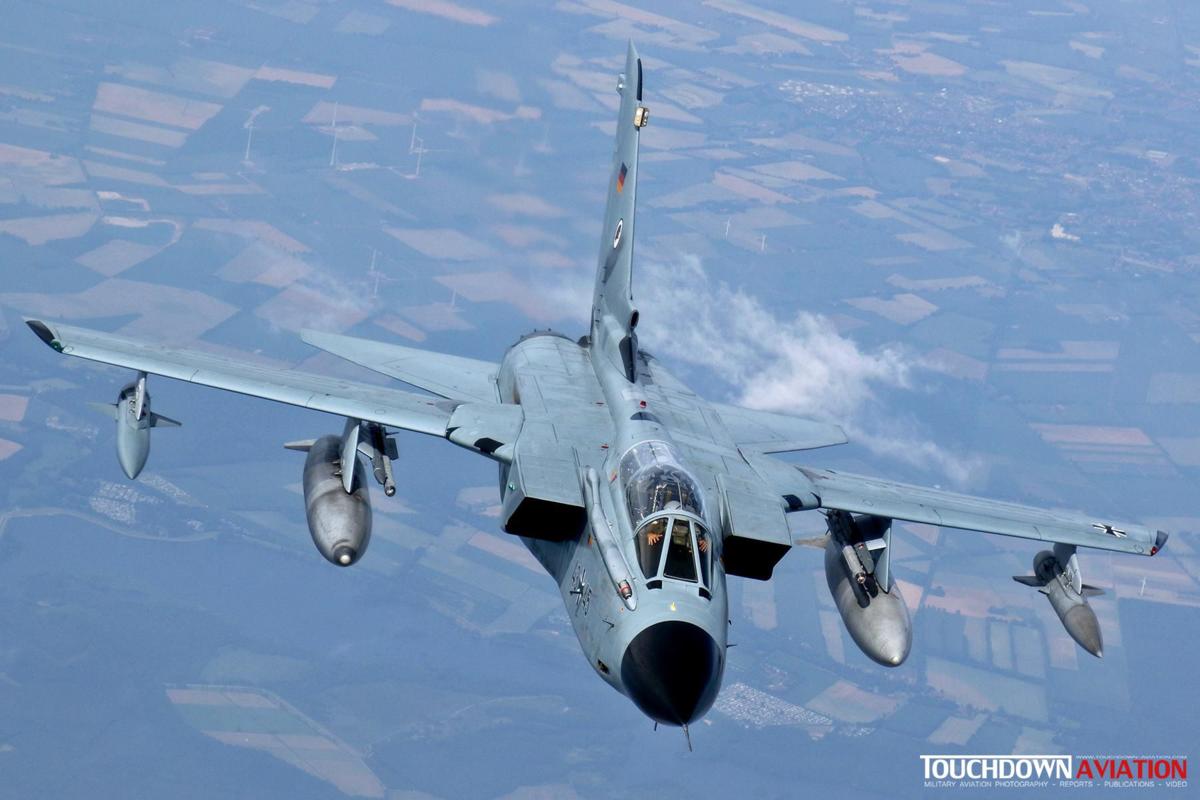 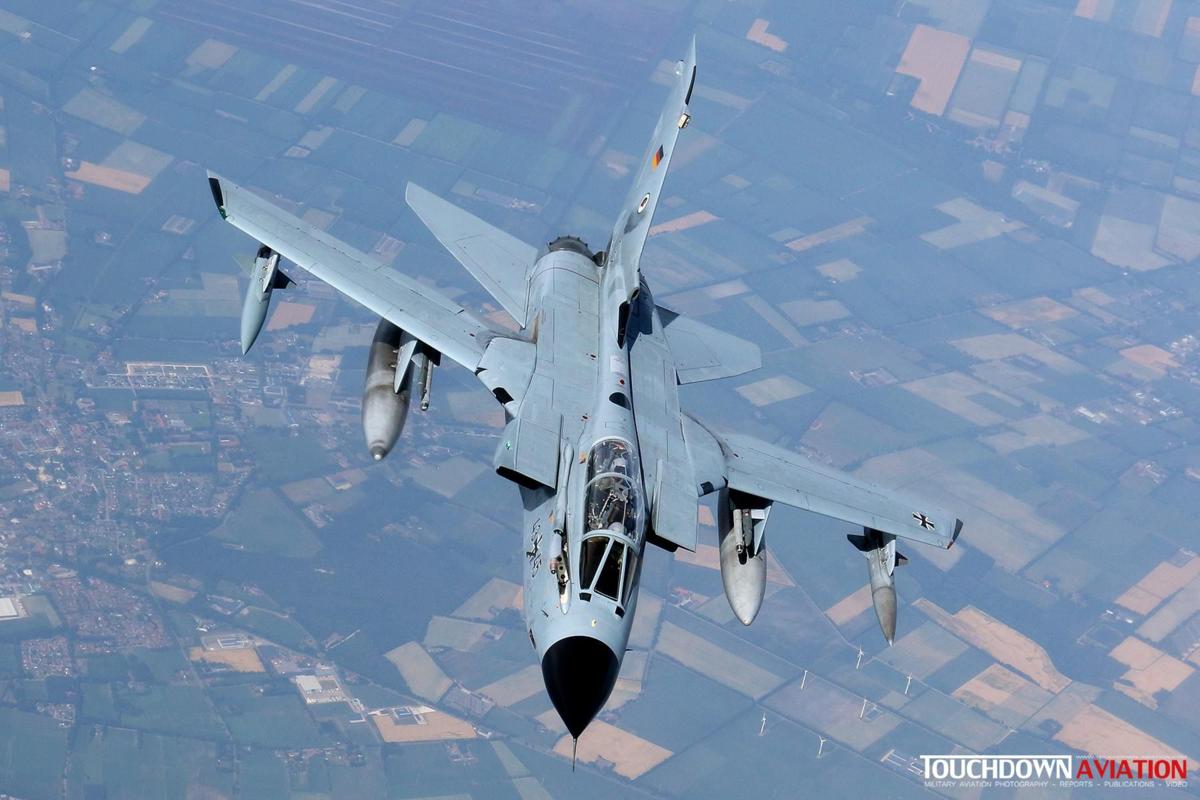 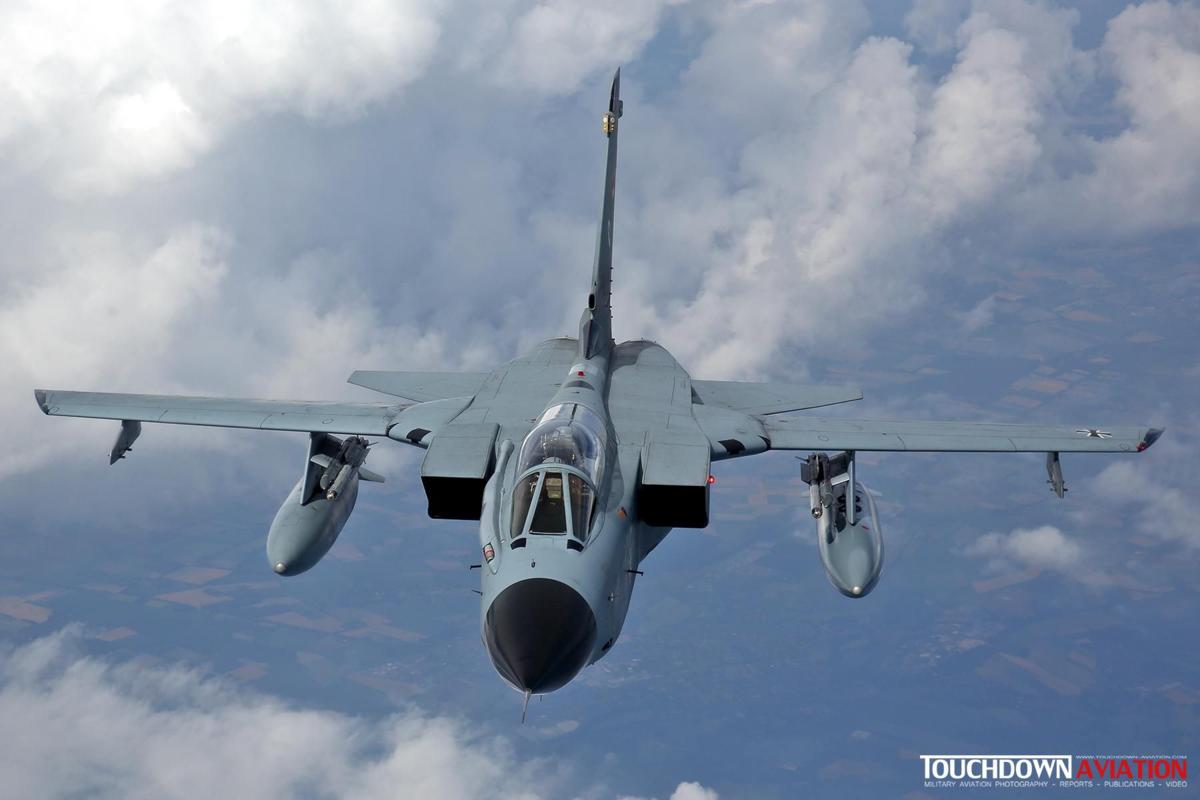 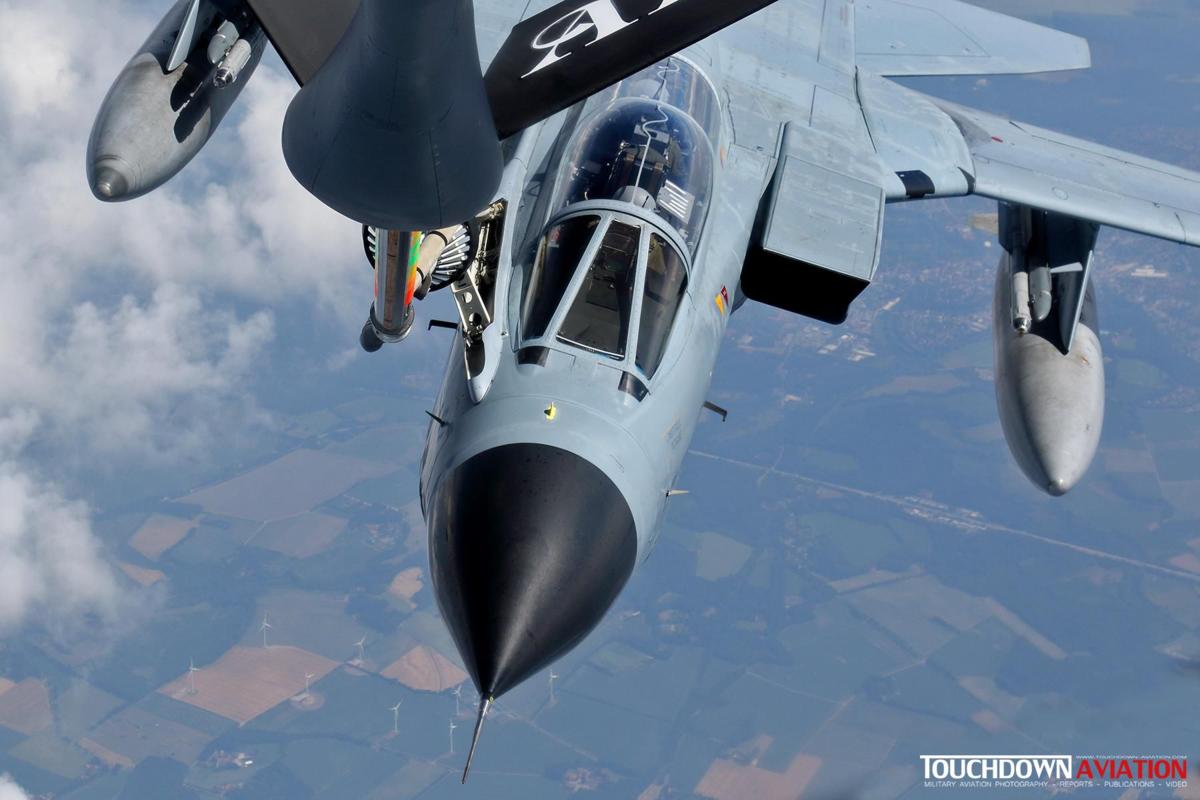 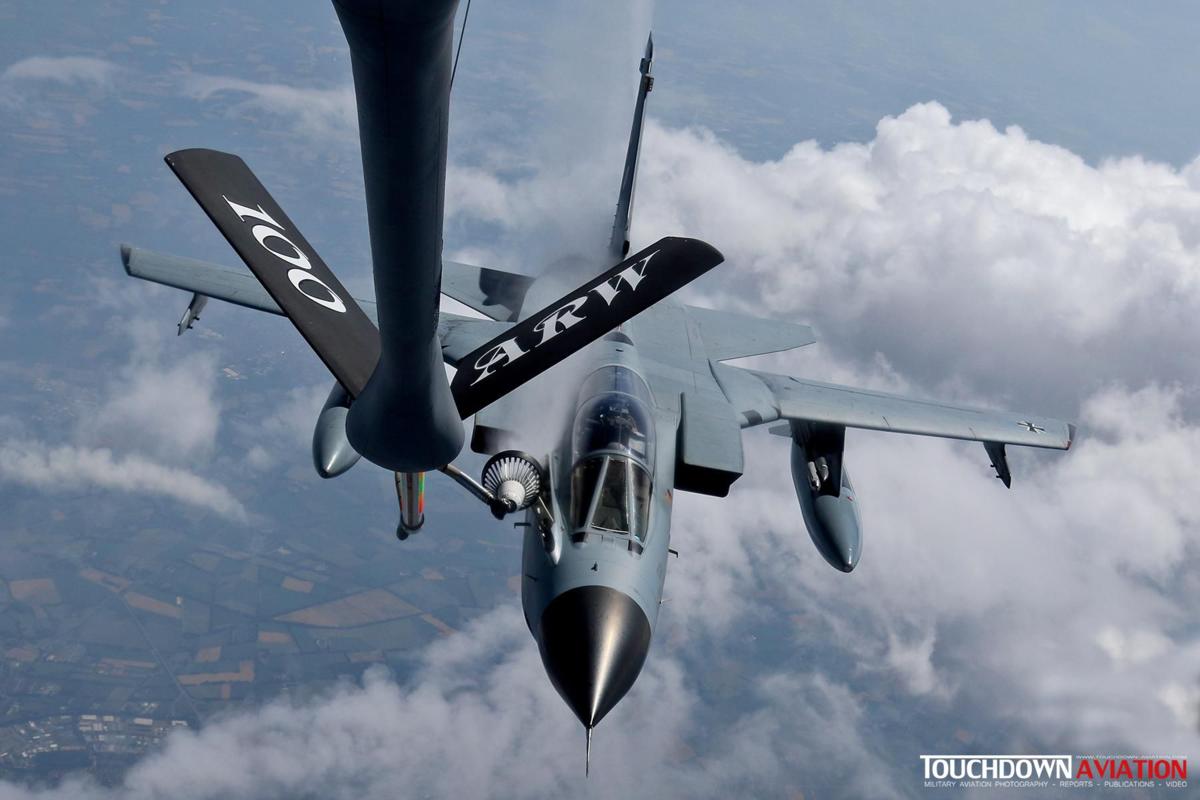 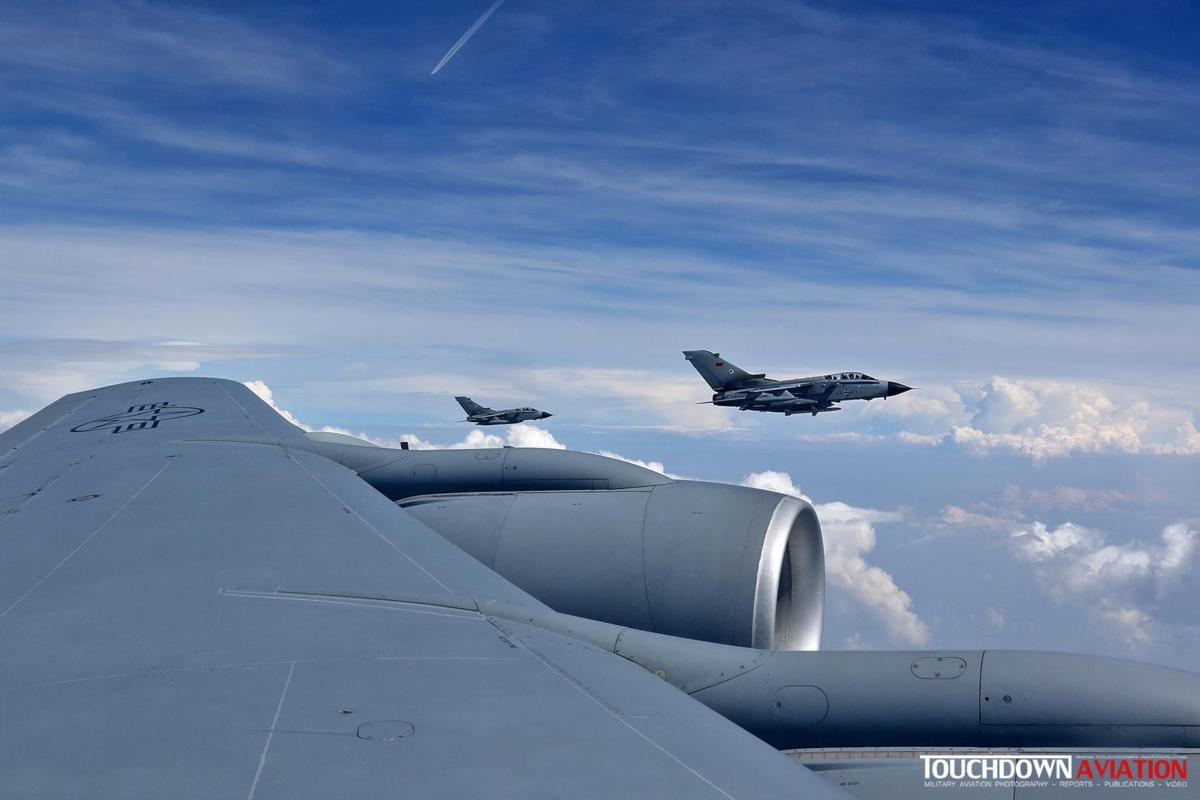 The author wishes to thank SrA M. Anthony for his assistance in arranging my visit. Special thanks must be given to the crew of 'QUID41' (Capt Brian Dunn, 1LT Eric Roach, 1LT Robert Reay, Master Sargent Heath & Master Sargent Chris King) who kindly allowed me to accompany them on their flight and could not have been more welcoming and helpful and finally not forgetting the German Air Force crews from TLG51.