To prepare RNLAF helicopter crew for their future ISAF deployment in Afghanistan, exercise Dutch Blaze was held at different area's in the Netherlands from June 28th till July 9th. Participants were AS532 Cougars from 300 squadron and CH-47D Chinooks from 298 squadron. Touchdown Aviation saw the Chinooks in action at the Beekhuizerzand during 2 evenings.

With the closure of RNLAF Soesterberg in 2008, the transport helicopters moved to RNLAF Gilze Rijen. Training area's like the Veluwe and the Leusderheide were used less than before and the training concentrated in the southern part of the Netherlands. This exercise was an exception. Main training area's were the Leusderheide, Stroesche Zand and Beekhuizerzand.

Also, for this occasion, MLT Deelen played a major role by providing the base camp for refueling, changing crews and additional training facilities. Both the Cougars and Chinooks trained here in troop transport, transporting heavy freight in the sling load and landing at uneven ground. Other missions were aimed at navigation flying in both daylight as in dawn, using night vision goggles. To distribute sound from Gilze Rijen to other area's the Chinooks remained overnight at Deelen during the 2 weeks.

Main goal of this exercise however was to certify Chinook and Cougar crews in the so called 'brown out' landings. Missions to countries with a dry desert climate like Irak, Ethiopia, Eritrea and more recent Afghanistan requires special training in take-off and landing. Both the pilots and loadmasters view can be reduced to zero when sand and dust blows up due to the downwash of the rotor blades. With the training being in a controlled environment the crew can get used to the different approach and procedures.

Watching the exercise we could get a good impression of the procedures for a 'Brown Out' landing: when approaching the landing zone, flying low over the treetops, one or more exploratory circuits were flown prior to landing to get awareness of the area. If the area was clear the most spectacular part, the landing, could commence. With a relative fast speed, descending while moving forward to get ahead the dust cloud, the Chinook was put on the ground. After takeoff this procedure was repeated several times, with a two or single ship. The photos will give a good impression of the spectacular and impressive sight. 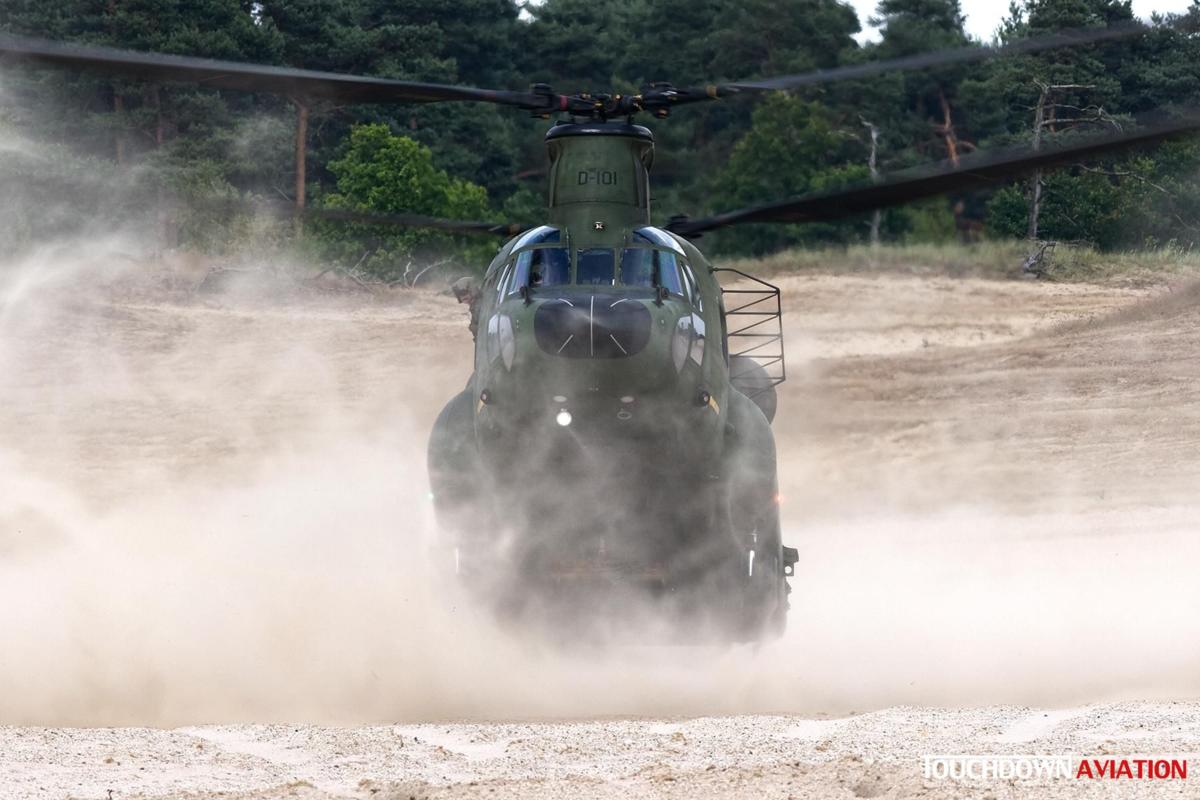 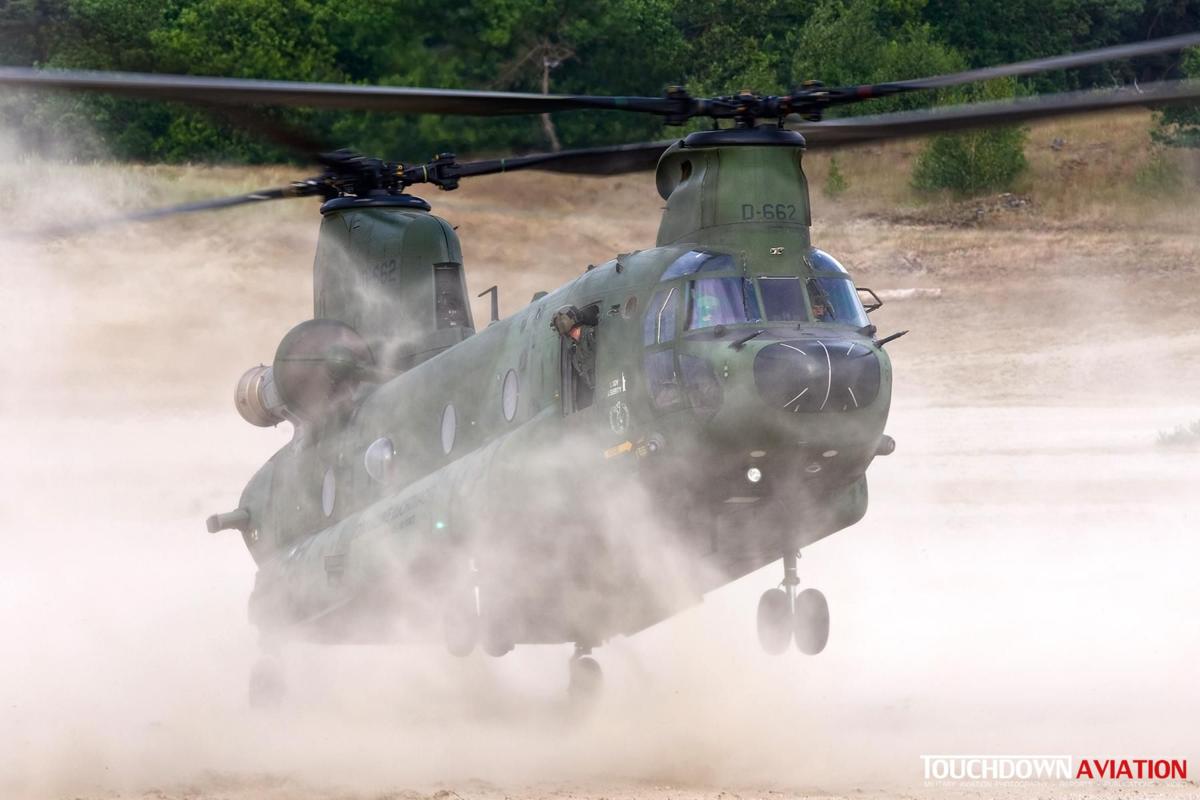 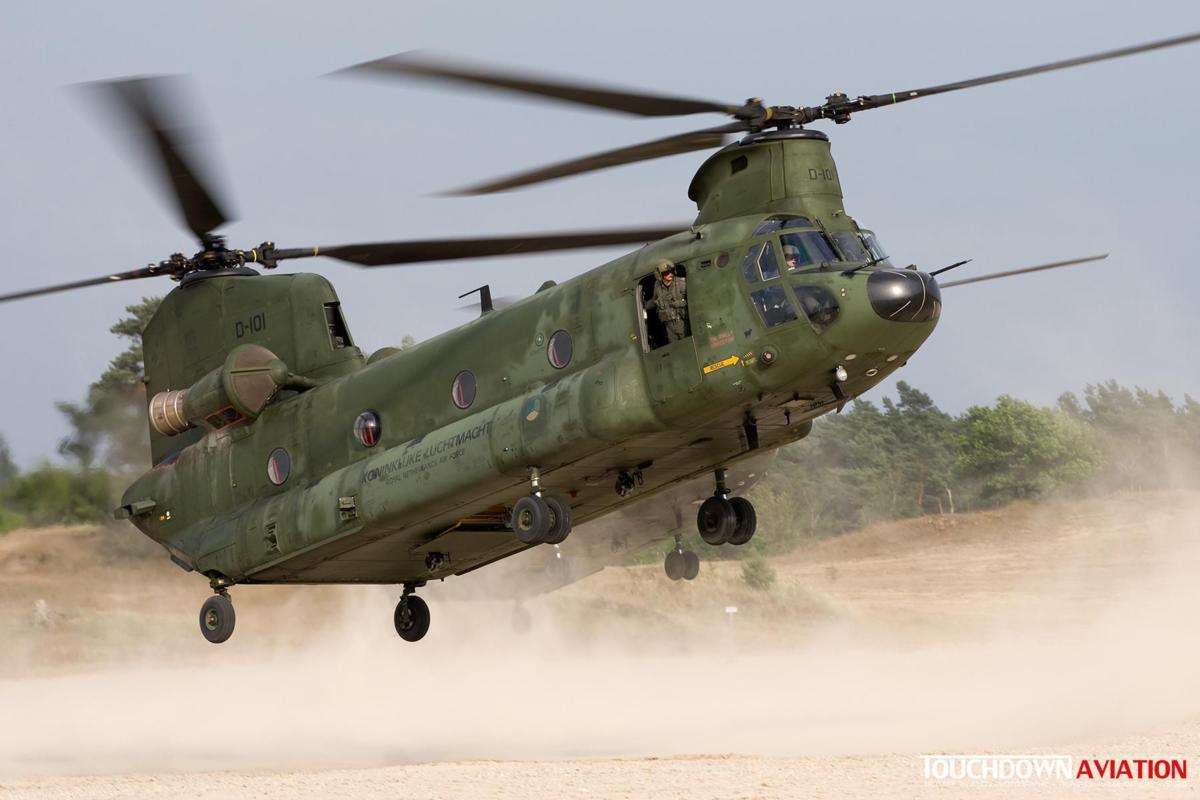 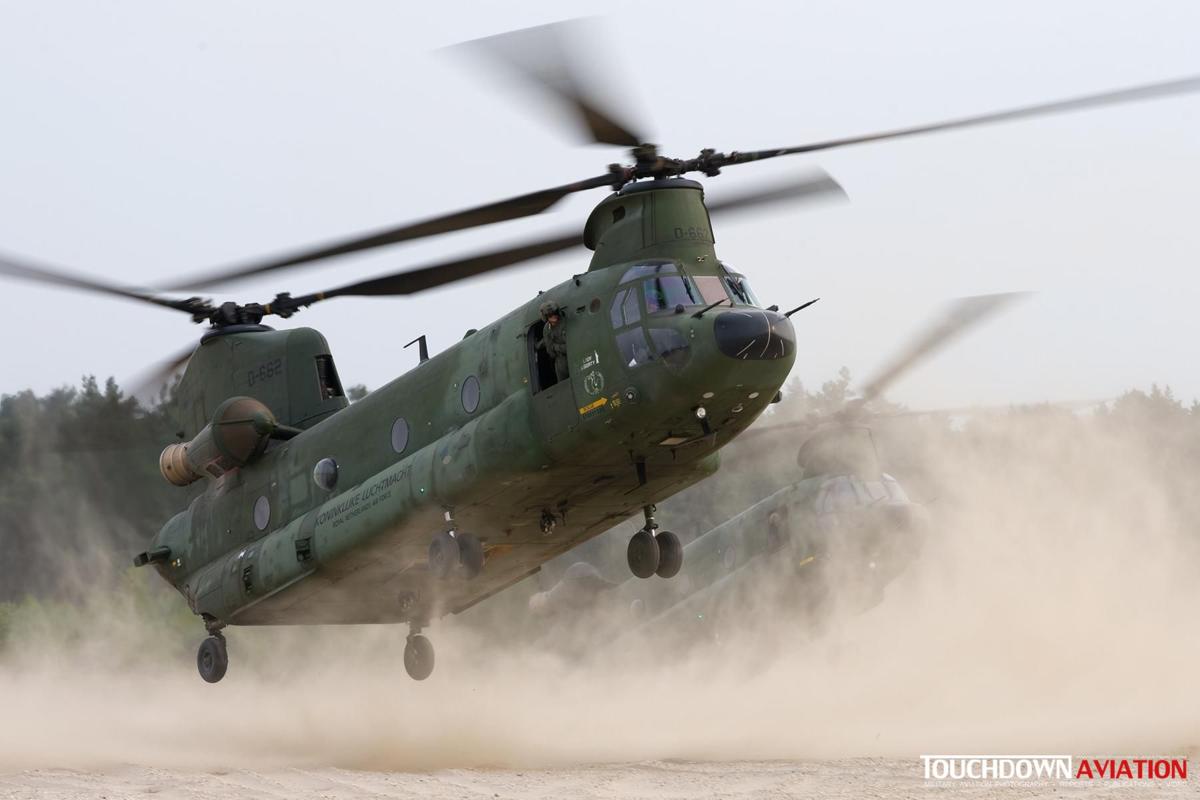 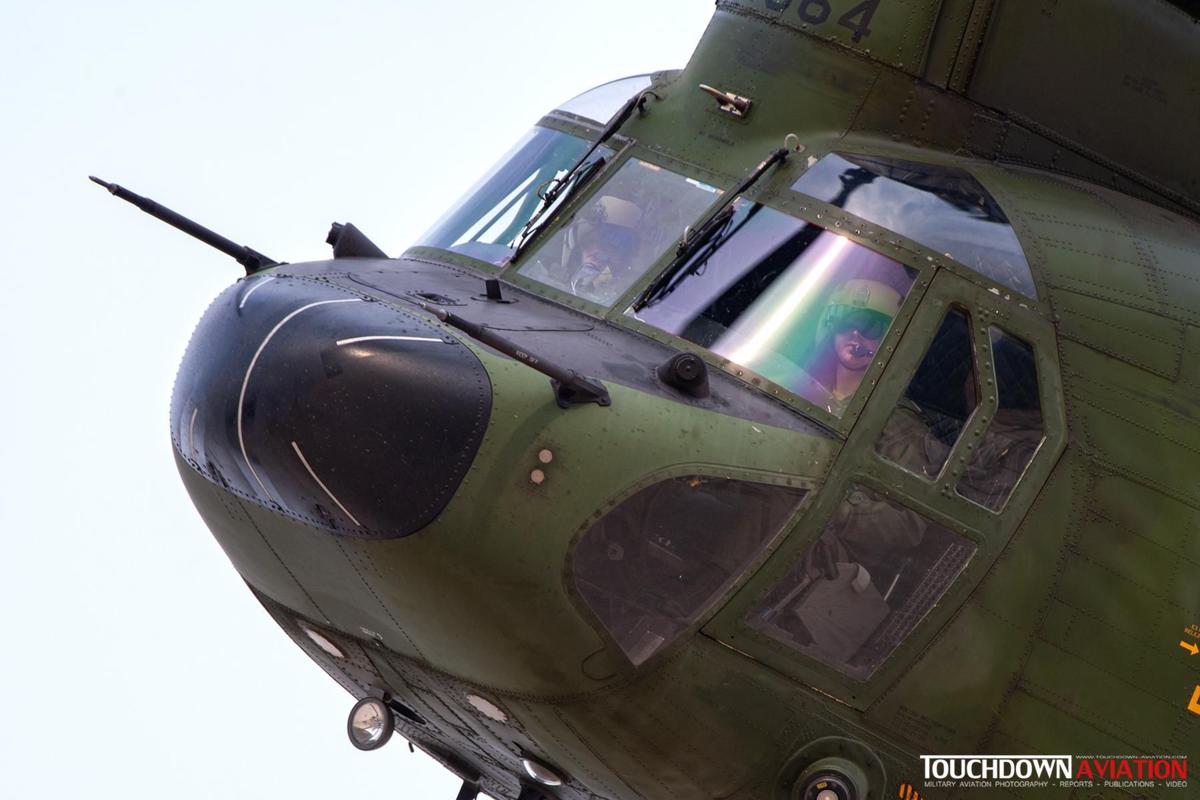 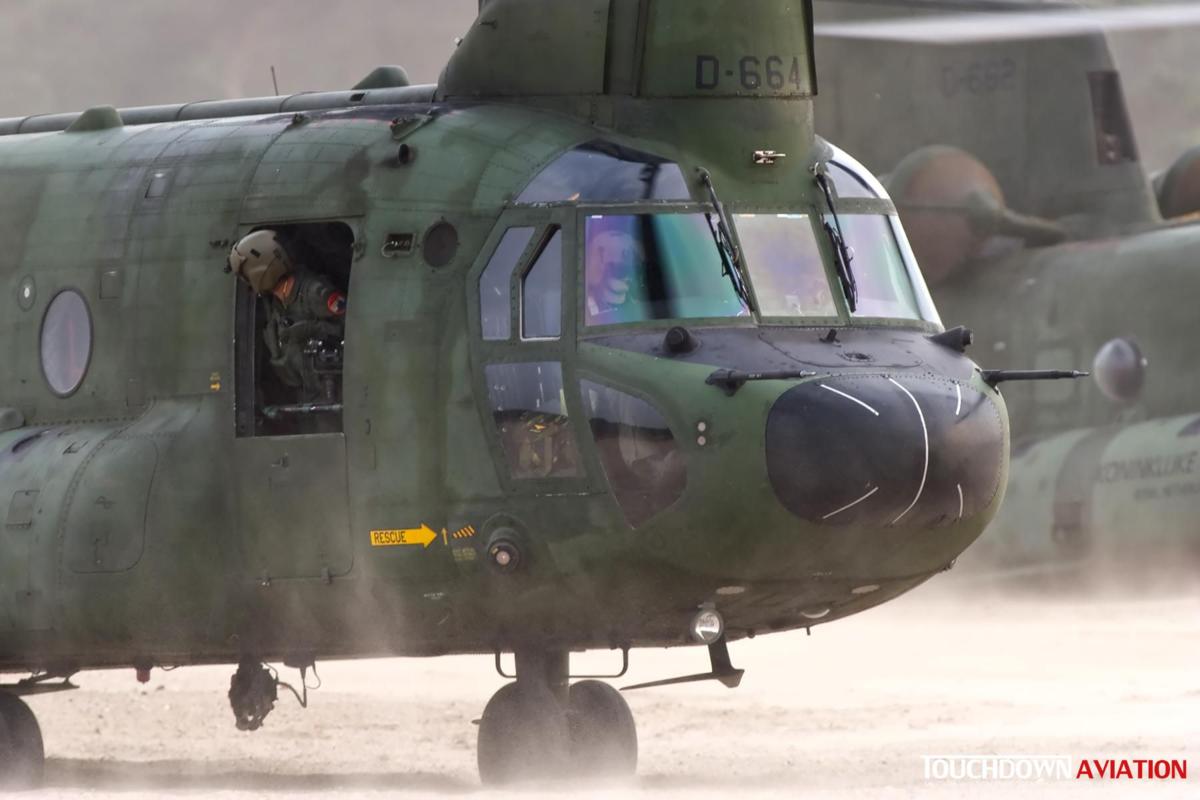