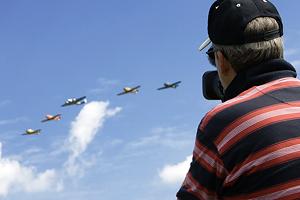 Born in 1954 and lives in Amersfoort near the former airbase of Soesterberg Jan is visiting airshows since 1991. The first airshow was of the Royal Netherlands Air Force on Twenthe airbase.

Most military aviation enthousiastics are making photos, but Jan films, first for private use and later for Aviationvideo. Since 2008 he joined Touchdown Aviation. Jan uses the summer to visit several airhows all over Europe and makes many hours of videoshots. During the winter he edits this material to make the DVD's.

Jan first filmed in Video8, than Digital8, DV and now in HDV (High Definition Video). His latest camera since 2007 is a Canon XH-A1.